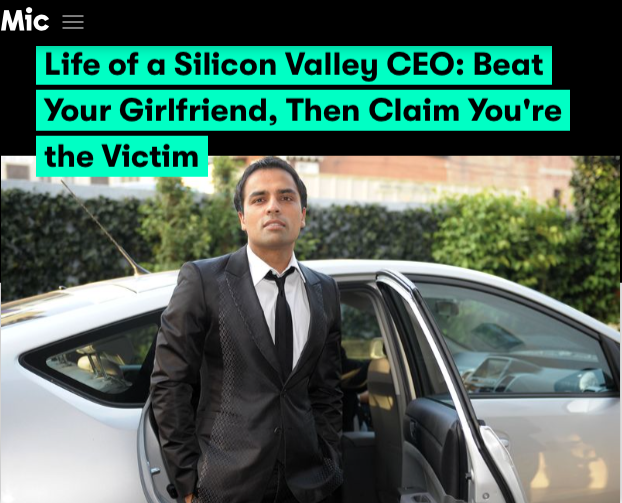 What finally inspired me to get out of an abusive relationship was when the cop said, “next time, there won’t be a next time.” But it wasn’t what she said, it was how she said it. She looked at me blankly and said it like I was nothing but a statistic, just another day on the job, and just a number and another case file.

This stuff happens So Often, for so many reasons, but the primary that it truly happens and continues is because nobody talks about it. Women are often scared from constant threats, or will feel stupid for staying with him despite the fear. Men are in denial, or simply don’t care.. because nothing is stopping them. Laws are horrible and not protective at all. And people immediately tend to blame the woman. If a woman gets the shit beat out of her at home, the first assumption typically is “well she’s an idiot for staying with him!”

But why people are often completely wrong in that assumption is because they don’t realize that she is literally scared to death to leave him. Wouldn’t you be if someone threatened you daily, belittled you, and did everything possible to keep you down and scared?

The majority of time it’s nearly impossible to leave. They make you dependent in different ways, and constantly threatened, and brain-fucked with ‘it will never happen again I love you!!”… and then stuck. They keep you separated from friends and family as much as possible. If kids are involved they kids are even more afraid to speak out or do anything than the parent ever will be.

And so when things happen, but you’re not taken away in an ambulance and Forced to explain to authorities, you have a choice of either A. risk your life over bypassing the threats, entirely moving out and on, and going to the courthouse to get one, or… ? B. just don’t piss him off again and things will be ok. And it almost always seems easier to just stay (B) and tiptoe instead of causing a domestic civil war.

Little moments make up the majority of moments.?They destroy you piece by piece, not in one big collision. Probably 100 small moments is what leads up to the one big moment which may end up with authorities.

I remember bonding with my puppy when we were both laying on the floor looking at each other while my ex paced over us with a big kitchen knife. Nothing happened That time. But even the completely stubborn and misbehaved bulldog puppy was completely silenced and stopped frozen, and knew that it was a 50/50 moment. How many 50/50 moments does it take before the one where you’re not lucky? You have to escape or wait to find out. There really is no out.

Episode 2 of Big Little Lies is what finally is triggering me to blog about this stuff. I couldn’t find any resources whenever it was happening. Pretty much any time a girl I knew was in this situation (which was nearly half of my friends since college), there was absolutely no talk of it from anyone or signs, until it as some big incident where there isn’t any possible way to hide the damage. Most people learn and move on. But above all, most people don’t really talk about it.

In episode 2 of Big Little Lies, a perfect example is given and it’s s a tiny, tiny moment. The seemingly “perfect” husband was “provoked” to slap her really hard because he changed his flight for work to be there for his kids’ first day of 1st grade. But she didn’t tell him about orientation day which was the day before. That was the social/interactive day where you get to meet/greet the other students and teachers. So when they dropped the boys off for their first day of first grade, the husband didn’t get to go into the school or meet the teachers etc. And he was mad. She had provoked him by not tell him about orientation day, and he was mad, and so he slapped her really hard. She slapped him back. The he slapped her harder.

The sad thing is that the woman can literally almost never physically win. The only exception is Jenifer Lopez in the move “Enough”… where she had an expert teach her. But that was a movie. I feel like even?if I did train my hardest, I still would never win.

Guys like this not only physically win every time, but are highly likely to win in every other way also. ?This guy hit his girlfriend 117 on Camera, and yet Still Denied it. And walked away off with a $500 fine and some community service. Then, this guy did it again a year later.. and that girl escaped to overseas. And then, he did it a third time. It’s not affecting him. He’s raising money, promoting his (from what I heard con) new company. He’s been extremely threatening and abusive with his employees. But, he continues to do it because he can.?

“According to prosecutors, Chahal hit and kicked Kakish 117 times over a 30-minute period. The episode was also reportedly caught on home security tape, but the judge eventually ruled the footage inadmissable, deeming its seizure a violation of the Fourth Amendment.”

When Kakish refused to cooperate with the legal proceedings, the case fell apart somewhat. Chahal pleaded guilty to two misdemeanors earlier this month and was handed a $500 fine, 25 hours of community service and no prison time.?

You know why he got away with only $500 fine and some community service, and why she refused to cooperate with the legal proceedings?? Simple. She was scared to death.

“In October 2014, Chahal was taken into custody?for?kicking another woman?multiple times, as first reported by the San Francisco Business Times. “?

In both instances, he remained at the head of tech companies where, according to a lawsuit reported for the first time by The Daily Beast, he routinely called people ?n—rs? and fired an employee who allegedly tried to stop him from hitting a third woman.”

And what lies ahead for men like this? Apparently, Venture Capitalist positions.

Time #3. (within a few years. on record times..off record would be a lot more) This time, tried to be intervened and stopped by an employee… who was then fired. This reference article is a must read: https://www.thedailybeast.com/silicon-valley-ceo-called-employees-the-n-word-and-hit-three-women-new-lawsuit-claims

The little moments add up. At the very end of Big Little Lies, the seemingly perfect husband is killed. But by who?? You have to watch to find out. He also raped a woman who’s son (by that rape incident) ended up going to school with his kids… unbeknownst to everyone until the end. (sorry for that spoiler alert, but it’s still 100% worth watching!)

Unlike the majority of men and couples who deal with domestic violence, Nicole Kidman’s character and him actually tried going to therapy. Usually guys like that refuse to go to therapy. Ever. Which is where the real issues begin.

I really liked in the movie Chocolat how they showed that that Neanderthal husband was forced by the town priest to try to not be violent. It didn’t work, but it was a real progressive step in not automatically blaming the woman for running away-and actually acknowledging domestic violence and trying to fix things. I also like how in HBO’s “the Defiant Ones” Dr. Dre talks about how where he grew up it was so common, and now he sees and understands more of what he did and regrets it.

?Any man that puts his hands on a female, is a f*cking idiot. He?s out of his f*cking mind. And I was out of my f*cking mind at the time. I f*cked up. I paid for it. I?m sorry for it. I apologize for it. I have this dark cloud that follows me and it?s going to be attached to me forever. It?s a major blemish on who I am as a man.?

Dr. Dre coming out and saying something like that, and more importantly than saying it… actually trying to prove that he’s working on change, makes him more of a man than most.?I understand that it’s hard to admit. It’s hard to talk about too.

Nobody talks openly about it. Nobody does anything about it. It’s very hard to get help for it. And no action happens until it’s too late.

If Chahal tough guy had gotten away with hitting his girlfriend 125 times instead of 117, or choking her out for just a little longer, would it then be a murder sentence instead of some community service?

Is that what’s truly necessary for anyone to take action?

It’s just like healthcare, or anything in life really… taking a preventative approach is a lot easier and healthier than taking a reparative one. Except abuse isn’t a big money industry like medical and big pharma, and the only thing really that’s holding back progress and change is cultural taboo, stigma, and far, far too many big little lies.