It’s fascinating how companies rely more and more on big data, while ignoring the very basics. It’s like big data comes from the PHD program of Idiocracy University. It sounds so legit, and it allows you to look and sound so concise, so precise, particularly as you do those dreaded presentations in front of others. You have facts. You have Data. And not just any data, BIG Data my friends. Big. HUGE.

But let’s back up and look at big data’s origins, such as from it’s rudimentary forms… ?surveys. Good ol’ fashioned tried n true survey data.

I recently took a survey that took me around 30 minutes on a Saturday night of all things. 30 minutes!! This was a low moment. Here’s why.

FIRST: Anyone who’s willing to take a random tedious boring survey of 30 minutes or even 5 minutes of their time is either:

A.?Angry (and wants to give their angry opinions

C. Motivated to validate that time at blind and slim odds at $50 prize

Anyone who’s not willing to take a random survey is:

B. Not motivated by a blind slim % chance at a prize

C. Has more interesting things to do in life than take surveys

Why did I decided to spend 30 minutes on a horribly tedious and boring survey??

A. I thought the odds of me winning $50 or $500 here was possibly much better than a scratch-off, mainly because it said that I was ‘targeted’ or ‘chosen’ or something.

B. I never take surveys and did mainly for no reason other than a different ‘experience’

I’m not going to be mean and mention the name, but the survey was by one of the biggest survey companies out there.

And I found out around halfway that it was for Uber… because the questions were nonstop about Uber. So, they def probably paid the $$$ for big $$$ decisions I’m assuming.

Except I’m a nobody who hasn’t taken research method classes in like 10 years and yet I saw 3 obvious massive flaws right away. 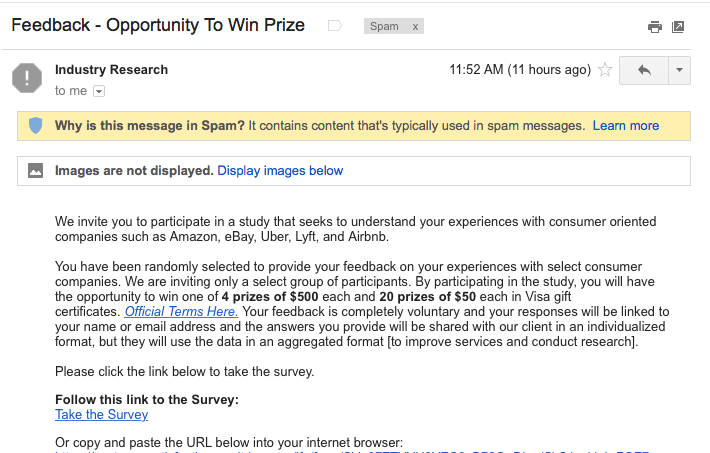 You probably are thinking, that was like spam survey and that’s was NOT something that would contribute on the smallest level to big data beloved by big companies!! No way.

Except that.. I was so surprised I took some screenshots when I took it. And without saying the name of the research corp. and ruining someone’s day big time, you view and judge yourself. I do NOT click on emails/urls or anything that I’m not familiar with, and I’m more familiar than I would ever want to be with spam and junk. This wasn’t a run of the mill junk email or survey. 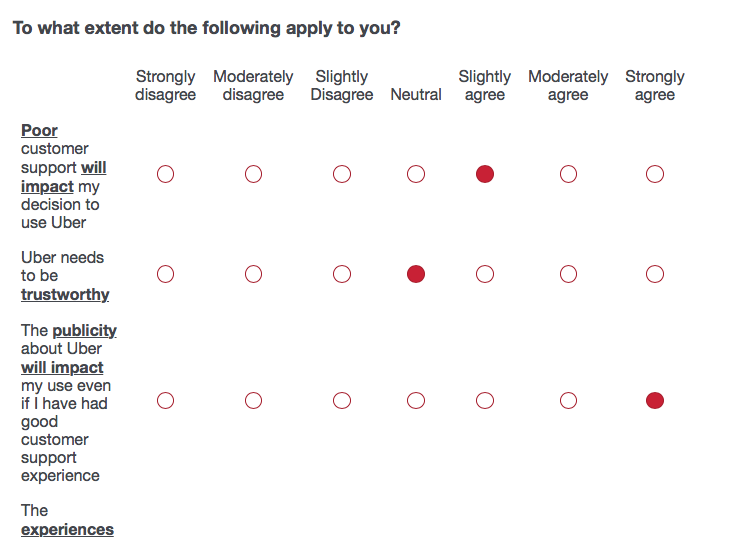 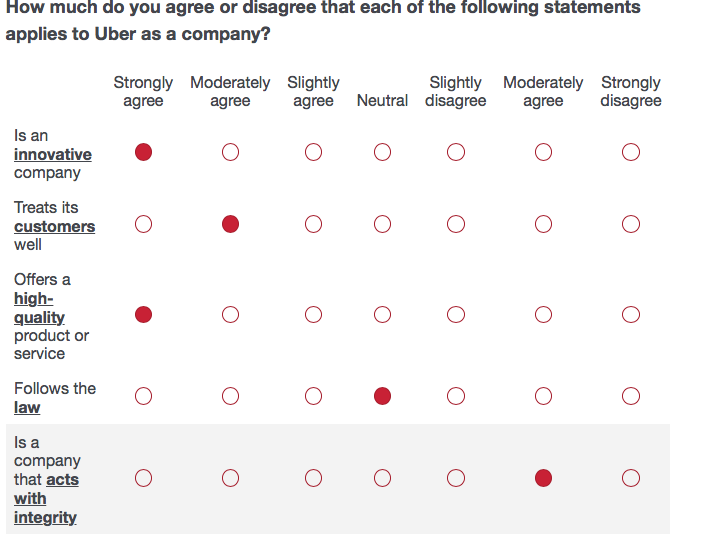 Moment of truth. I think Uber could have got more accurate survey data if they gave a minimum cohort # and type of people to interview, and a street team with phone cameras to interview strangers. I think that simple method wouldn’t get the biggest of data, but I am pretty certain that it would get better data.